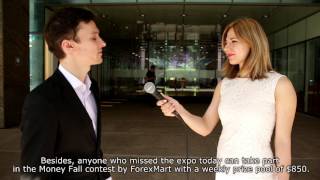 ForexMart at the exhibition in Kiev
Interview with ForexMart representative Eduard Savchenko.

How USD index will change by the end of 2015?
Interview with speakers at ShowFx Asia Conference in Singapore. August 29, 2015. In Forex market since 1999. In 2002 - 2003 worked as manager in the Adelina dealing center and the Brezan dealing center (currently Fx Pro Financial Services) where provided basic training in Forex.
In 2003 - 2004 provided training based on his personal groundwork in the Forex Club dealing center. In 2004 - 2009 was a freelance lecturer in the Alpari dealing center and provided basic and professional training. In 2009 - 2010 worked in Pro Finance Group. In 2010 provided Forex basic training and convened master-classes in Nefteprombank.
Since 2010 deals with Forex capital management.
In 2009 - 2010 authored a series of articles at Fortrader.ru online magazine, issues #51 - 60; and in the Forex magazine, issues #298 - 306.
In 2011 authored the second book Forex Indicator Analysis. The Encyclopedia of Trading Systems.